Penthesilea: The tragic life of the Amazonian Queen

Penthesilea may not be the most famous mythological figure, yet her story is more fascinating than many Greek tales

Have you ever heard the story of Penthesilea, Queen of the Amazons? While you may be a die-hard Greek mythology fan, the story of Penthesilea is lesser-known than many other tales about children of the Gods. However, it is one of the most important stories in mythological history. From her childhood trauma to her role as royalty to her death at the hands of a legend, Penthesilea’s life (and death) were fascinating glimpses into the depths of true grief, love, and fate.

The early life of the Amazon Queen

Penthesilea may have fought for her reputation, yet she was born into status. She was the daughter of Ares (God of War) and Otrera (Queen of the Amazons). Born into the Amazons all-female society, Penthesilea was raised in a culture of strength, bravery, and skill. At a young age, she became skilled with weaponry and frequently experimented with weapons to enhance them.

In addition to her craftmanship and battle-worthy talent, Penthesilea was also one of the most intelligent girls in her community. She showed promise of becoming an exceptional fighter and young woman. Still, she was not the only daughter in the family. In addition to her, her mother also gave birth to three other daughters: Hippolyta, Antiope, and Melanippe.

Although the sisters were all trained as warriors, they loved one another even more fiercely than they loved to fight. They spent much of their time together practicing their skills, exploring their land, and learning from their community. Growing up together gave them a unique edge as a dynamic, female family.

“Not in strength are we inferior to men; the same our eyes, our limbs the same; one common light we see, one air we breathe; nor different is the food we eat. What then denied to us hath heaven on man bestowed? O let us hasten to the glorious war!”

– Penthesilea, The Encyclopedia of Amazons

Sadly, while out hunting deer one day, Penthesilea mistook Hippolyta for an animal and stabbed her with a spear. Although she attempted to save her, Hippolyta passed away from her injuries. Following her sister’s tragic death, Penthesilea fell into a deep depression. She developed intense guilt for the accidental murder of Hippolyta, even considering taking her own life to end her suffering. So, how did Penthesilea go from deep grieving to becoming one of the most notable figures in the Trojan War?

Turning her grief to fury

Truth be told, her grief and her legacy go hand-in-hand. As her depression worsened, she realized a catch in her desire for death: as an Amazons woman, she had to die an honorable death in battle to retain respect. Fortunately, she was placed in a position to secure a glory-filled end shortly after she became one of the Queens of the Amazons—the Trojan War.

During the start of the conflict, Penthesilea opted to keep out of the war and avoid senseless violence that could harm her people. While she expressed support for Troy, she and her fellow Amazons didn’t get directly involved in the conflict until after the Trojan prince, Hector, was murdered in battle. Coupled with the death of her sister, a grieving and passionate Penthesilea gathered her women and led them on an attack against the Greek citizens invading Troy.

“Penthesilea in fury leads the crescent-shielded ranks of Amazones and blazes amid her thousands; a golden belt she binds below her naked breast, and, as a warrior queen, dares battle, a maid clashing with men.”

While other queens might sit back and watch their warriors do their dirty work, this wasn’t Penthesilea’s style. Having been raised in a community of warriors, she was the one who drew her weapon to lead the charge on the Greek soldiers. Her motivation wasn’t only to kill the man who murdered Hector, the great Achilles; she was also still determined to die, hoping to perish in battle rather than at her own hand.

When it came to her skills in battle, Penthesilea was unmatched. She and her community descended upon the Greeks like wildfire and ate up a significant number of their battling soldiers. While proving that they were capable of holding their ground, Penthesilea was focused on hunting down Achilles and avenging the death of the Trojan prince. However, when they finally came face-to-face, the situation took a turn that neither Penthesilea or Achilles could have anticipated.

After a powerful display on the battlefield, Penthesilea finally reached Achilles, the man she had been looking to kill. He had been equally as eager to face her as an opponent of the war. Penthesilea was convinced that once she murdered Achilles, she would gladly surrender to death at the hands of another warrior, having died a hero in battle. Fortunately for Penthesilea, she was able to deliver a fatal blow to Achilles’ body. 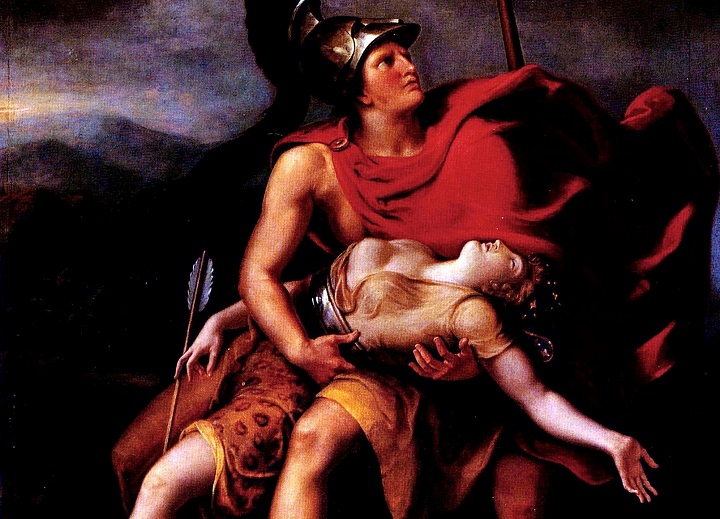 However, after stabbing Achilles and seeming to kill the Greek soldier for good, an unexpected hero swept in to save his life: Zeus. After witnessing his bloody death in Troy, Zeus used his Godly powers to bring the hero back to life to finish his leg of the battle. Once revived (much to Penthesilea’s shock), Achilles drew his sword and stabbed Penthesilea clean through the chest, disarming the fierce warrior queen.

Strangely, once Achilles had plunged his weapon through Penthesilea, he felt himself soften towards his young, beautiful opponent. He caught her in his arms as she collapsed and supported her weight as she lay against his knees. Suddenly, he found himself in love with one of the Amazons he had been so eager to kill—the very girl he just murdered in cold blood.

His passion was overshadowed by the fact that it was too late to woo Penthesilea. He had taken the life of the Queen of the Amazons, and while he managed to escape the battle nearly unscathed, his heart was broken by the loss. In fact, he remained smitten with Penthesilea long after he murdered her on the battlefield, and his devotion to her nearly unraveled his life.

Achilles may have been one of the greatest heroes in Greek mythology, yet he unraveled after slaying the gorgeous Penthesilea. Although there are multiple tales about the events that transpired after Achilles’ duel with Penthesilea—including potential necromancy with the fallen queen’s corpse—all have the same general theme: Achilles was a total mess.

“Penthesileia, the daughter of Otrere (Otrera) and Ares, who had accidentally killed Hippolyte and been purified by Priamos, slew many in battle, including Makhaon (Machaon); but later she was herself killed by Akhilleus, who fell in love with the Amazon after she died, and slew Thersites for rebuking him.”

Unfortunately, his love for his dead opponent wasn’t understood by all of his peers. The majority of his fellow warriors found mocked the grieving hero for his romantic interest in her corpse. One such warrior was Thersites, one of the soldiers fighting for the Greeks during the Trojan War. To mess with Achilles, Thersites took it upon himself to deface the body of Penthesilea, cutting out the young woman’s eyes.

In a fit of rage, Achilles saw only one solution to avenge his new love’s corpse: to murder Thersites in cold blood. Seems a little hypocritical, right? Thersites’ cousin, Diomedes, certainly thought so. He took his cousin’s defacing a step further by tying Penthesilea’s body to the back of his chariot and dragging the poor corpse through Troy, dumping her into the river.

An enraged Achilles fished her body out of the waters and, after realizing that it was no longer appropriate to keep the defaced corpse in a permanent state of agony, he gave Penthesilea a hero’s burial. While Achilles was still a legend amongst his people, his devotion to his enemy created a disconnect, changing the way the Greeks viewed him for the rest of his short life.

How Penthesilea is remembered in mythology

While it’s often believed that Penthesilea’s story is rooted in the iconic epic poem the Iliad, this isn’t the case. The Iliad ends in Troy, yet only tracks the events up until Hector’s death. Instead, Penthesilea’s story has been preserved in a more obscure text called Aethiopis. The epic poem features the evolution of Achilles’ role in the Trojan War, including the slaying of the beloved Penthesilea.

“All these to battle fared with warrior-souled Penthesileia . . . and o’er them all, how flawless-fair soever these may be, her splendour of beauty glows pre-eminent; so peerless amid all the Amazones unto Troy-town Penthesileia came.”

Fortunately, Penthesilea isn’t merely remembered for her ties to the hero, Achilles. Ultimately, Penthesilea’s legacy is quite what she might have expected it to be: tragic, heroic, and bold. While she spent much of her life consumed by grief, she was ultimately able to fight honorably for her people and die the hero’s death that she was so intent on achieving.

Interested in more Greek mythology? Start with the gods!

The Trojan horse was the real star of the Trojan War.